Odds and Ends from my brain and interests. Given that it is meant to be much like my old cartoon strip at the Lowell Connector, I suppose it is eponymous (I also like that it does make an oxymoron of sorts)

If there is to be anything here of any regularity it should be about sci-fi, computers, technology, and scale modeling with origami thrown in on the side (at least not infrequently). Oh, I would also expect some cartooning too

I originally started out with this project as one of my first Blender projects. Unfolding went mostly ok, with a few unusual results. Getting the plan right was really tricky (even now, I'm not sure if the "length" of the rocket includes the aerospike or not).

There are two versions. A gray version based on a couple of fuzzy images found on the web. I suppose that early soviet research missiles were finished in a very light gray or whitish finish given images of early R-7 firings and some of the "geophysical" and "vertical" launches of R-2As and R-5Vs. In operational use, these missiles were finished in army colors; probably the same scheme as their transporters. I'm sure there are soviet army guru's that could get this right; I'll admit I did it by eye.

Operational missiles used a radio navigation system to help them more accurately hit their target. These guided R-2s are often shown with two small antenna aerials rear the nose. The only clear view of these aerials are on photographs of a Chinese DF-1, a locally built R-2 version where they are clearly loops. 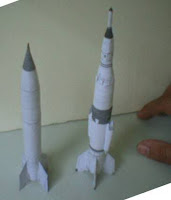 The Files: (on Google docs)

For more information about the R-2 missile itself, references and acknowledgments, read the previous post on this historic missile.
General recommendations: Use heavy paper instead of card stock. Prototypes built with paper over 40lbs are harder to work with on some parts. Best results with some special paper I got which is around 25lb (standard is 20). Try 28lb if you can find it (there is at Staples) or some of the cheaper photo-like stock which is around 35-40lb.
Coming soon, the geophysical R-2A sounding rocket. Nearly done, but getting the new nose cone and side canisters right is a bit tricky at this scale. Stay tuned.